Former Spain manager Luis Enrique has announced the death of his nine-year-old daughter Xana following a battle with cancer.

The 49-year-old former Barcelona midfielder left his job with Spain’s national team in June because of his daughter’s illness.

He initially stepped away temporarily and delegated his duties to then-assistant coach Robert Moreno, but eventually resigned to focus solely on his family.

“Our daughter Xana passed away this afternoon aged nine after fighting for five intense months with osteosarcoma [bone cancer],” he said in a statement on Twitter on Thursday.

“We want to say thanks for all the shows of warmth received over the past few months and we appreciate the discretion and comprehension shown.

“We also want to thank the staff at the Sant Joan de Deu and Sant Pau hospital for their dedication and treatment, to the doctors, nurses and all the volunteers. With a special mention to the palliative care team at Sant Joan de Deu.

“We will miss you a lot but we will remember you every day of our lives with the hope that one day in the future we will meet again. You will be the star that guides our family. Rest [in peace] Xanita.”

Josep Maria Bartomeu, president of Barcelona where Luis Enrique won two Liga titles as a player and as a manager and spent 11 years in all, sent condolences on behalf of the Catalan club.

All of our support and compassion goes to @luisenrique21, his wife and all of his family at this particularly painful time. All the Barça family are touched by the loss of Xana. Our condolences and all our sympathy for the Martínez Cullell family. https://twitter.com/luisenrique21/status/1167160550842937345 … 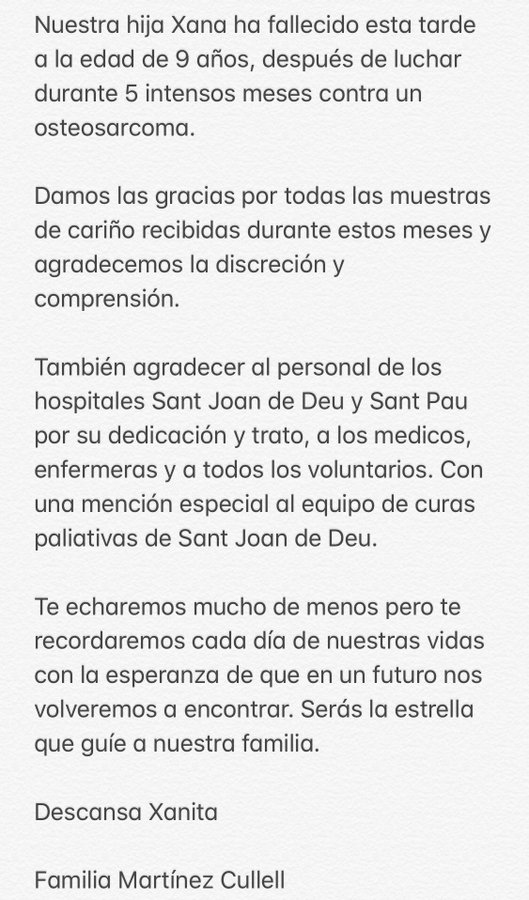 “All of our support and compassion goes to Luis Enrique, his wife and all of his family at this particularly painful time,” Bartomeu said in a tweet.

“All the Barca family are touched by the loss of Xana. Our condolences and all our sympathy for the Martinez Cullell family.”

Osteosarcoma is the most common form of bone cancer and is most prevalent in teenagers and young adults.

Most people diagnosed with osteosarcoma are under the age of 25. The type of cancer is thought to occur more often in males than in females.

Tickets for Sarkodie’s UK concert sold out within 10 minutes

Sarkodie and the compozers to thrill fans in UK this March